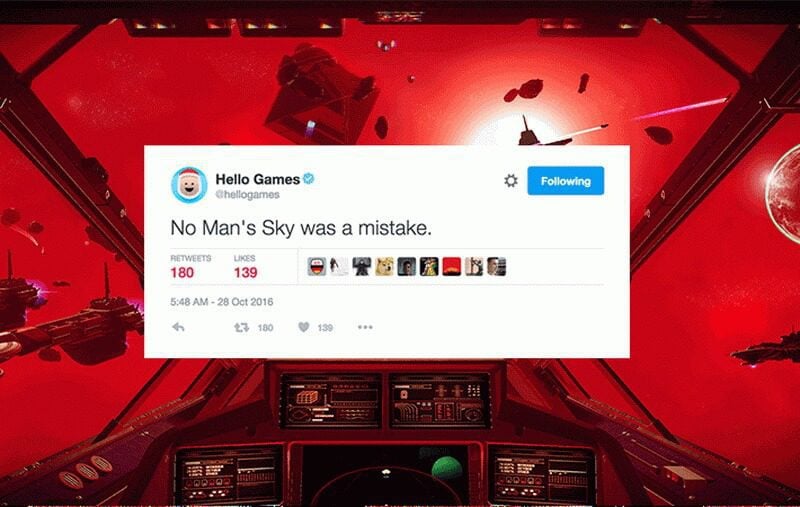 Hello Games, a small indie studio comprising of all but 16 employees have been in the middle of a storm ever since it released its over-hyped (and over priced) indie sandbox game No Man’s Sky earlier this year.

It seems, controversy refuses to leave their side or perhaps, they want to keep it that way. Whatever, be the reasons, the internet erupted after Hello Games official twitter handled posted this message: “No Man’s Sky was a mistake“.

The media was quick to latch onto this and make it a story and headlines such as “No Man’s Sky developer tweets ‘game was a mistake'” were slapped across many major websites.

However, the developer denied that the tweet was intentional and blamed it on a ‘disgruntled employee’ and then more weird statements were made to other outlets such as Polygon.

One them claimed to be from Sean Murray who disclosed he was the one who made the tweet because ‘the team wasn’t coping well” (with the controversies).

Finally, the mystery behind the series of weird statements and counter-productive tweets was solved as Murray confirmed his Linked In profiled was hacked and hence the hacker was able to access mane of their official accounts, which he misused to make those statements.

Questions still remain though. This wasn’t the first time Murray’s account was hacked and also it’s really strange how hacks to such extents can be carried out consistently and appears to happen when nobody is talking about the game anymore.

On the record, this has to be termed as being a hack but we have to wonder what’s going on at Hello Games, as things keep on becoming worse.