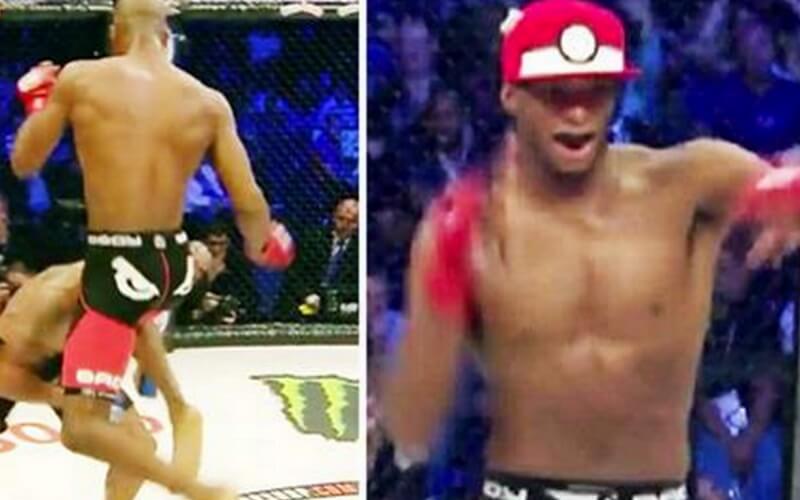 The Pokemon Go craze is only getting bigger, and references of the game and the popular anime are making its way into everything. The latest to fall prey to this phenomenon is MMA.

During a recently concluded Bellator 158 MMA event, which was held in London, notorious MMA fighter Michael “Venom” Page competed against Evangelista “Cyborg” Santos. The fight was for the welterweight title.

Page managed to knock out Santos with merely 30 second left on the clock, and he achieved this feat by dishing out a flying knee to his opponent’s head. Santos fell to the canvas immediately and the referee declared victory by knockout.

What followed was something no one expected. Page ran to the ringside and his trainer quickly gave him a Pokemon trainer cap and a Pokeball. Page then wore the cap and went to the other side of the ring and actually threw the Pokeball at the opponent.

Maybe he was just being funny, maybe he tried to symbolize that he successfully overcame his opponent, or maybe it was just a poor way to make fun of his opponent. Whatever it was, it looked hilarious. Take a look below:

Massive Update! It turns out there was nothing funny about this knockout, it actually resulted in one of the worst injuries in MMA history, shattering Evangelista “Cyborg” Santos’s skull. Check out more information and horrifying images of the X-ray:

Report from Cyborg’s ex wife:
“Fight fans Please say a prayer for me Ex husband Cyborg Santos. Many of you watched him fight on Spike TV this weekend when he suffered this injury while fighting in London. Cyborg is still in the hospital in the UK, and they are not sure when he will be able to fly again. He has not had surgery yet and their is worry the brain can continue to swell causing more damage. @bellatormma is suppose to be responsible for all medical procedures needed to fix this injury from the fight, however Cyborg is going to be unable to work for sometime and we will be putting together a #gofundme for Fight fans wishing To sponsor him And his Family at this dificulta time. Thank you God for your protecion, The dr said this very Easily could have been life threatening. Please show your support for the fighters and share!”