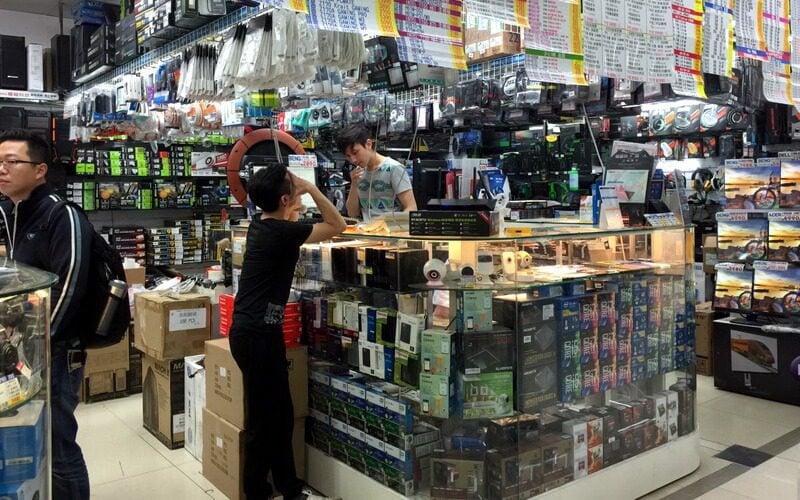 The way that people shop for electronics, gaming gear, and PC parts in the West varies greatly from how they do it over in the East, where all of these parts are actually manufactured. Let’s take a trip over to Asia to check out some of the flagship stores…

Most of us are used to just picking out our parts online, placing an order, and having them show up on our door shortly after. However, in Asia it’s a completely different scene. Let’s talk “”3C”. The 3C area in Taipei is a haven for computer gear & any other form of electronics.

When you walk inside, you’ll be overwhelmed by all of the different venders who have practically anything you could ever imagine. You can walk in with a hand full of cash and walk out with a brand new rig.

Compared to the west, focus on physical media is still prevalent in Asia. Some stores there sell nothing but blank discs, whereas over in the West you’re lucky if you can find a stack of CD-Rs in some stores these days.

It’s quite rare to find a physical store in the west based off your favourite tech brand unless it’s the Apple Store, but even companies like Intel and Razer have their own dedicated store fronts over in Asia.

It’s quite ironic how Asia is the centre of manufacturing all of these products and pushing the technological envelope further and further, not only being on the cutting edge but actually defining it, yet they still use the same methods of commerce that people used in markets a thousand years ago.

It doesn’t matter what you need, you’ll find it here:

Take a look at some of the flagship stores, starting with Razer…

Does your PC accessory store in the West have their own DJ?

Even Thermaltake is getting in on the action:

It makes sense that these companies would put a lot of effort into flagship stores in the East because that’s how people like to shop. In the West, there just isn’t a big enough market for enthusiast-level PC parts to have an entire store dedicated to selling ram or fans or whatever else.

Stores like Best Buy sell parts, but they’re usually very overpriced and nowhere near the high-end stuff that serious gamers are looking for.